May 30, 2019
Travis had very few communication skills when we first met him.  The adults caring for him communicated with him by poking, prodding, and pointing.  He communicated back with smiles, crying, laughter, and head-banging.  That was about it.  Our first few days with him, he would drool, kick his legs, and even slam his head on the floor, wall, or crib.  When he was happy, he would smile, be silly, and sometimes laugh to the point it was excessive.  These behaviors reduced rapidly and massively within the first few days we had him.  I credit most of this to Ken and to ASL.  When Travis would cry to the point of drooling, Ken would wipe Travis' mouth and sign, "No, you don't need to drool.  Just tell us what you want."  I actually told Ken I felt like it wasn't fair to correct Travis, telling him "no, no" about drooling since he didn't understand anything yet.  Ken rightly pointed out that we'd be speaking English to him if he was hearing.  <throat touch> Right.  Ken and Travis had an immediate "deaf mind" bond.  Ken just "got" Travis in a way I couldn't and Travis could feel it.  I'm so thankful to Ken, the fact that he's deaf, and to ASL for opening many doors to Travis' brain.  We saw rapid strides in language acquisition.  It was so fascinating, we began filming it and posting it on YouTube.

While the strides were exciting, Travis still had to deal with the effects of language deprivation on top of all the trauma that comes with adoption. (Being relinquished by one's biological family, experiencing abuse and neglect while in government care, being adopted by complete strangers of a new culture and ethnicity.)  Even though we could see Travis' cognitive functions were firmly in place, we also noticed plenty of gaps.  At the end of Kindergarten, we knew he wasn't quite ready to move to first grade, so he stayed in K one more year.  Best decision ever. That put him in class with his brother and a fantastic group of kids and families.  His math skills progressed on par with his peers and he made improvements in school each year.  While he was progressing personally, he was falling further behind his peers when it came to language.  It makes sense considering this:


"Even after decades of language use, later exposure to ASL meant less processing in language brain regions – highlighting that the sign language acquisition window is not longer than spoken language. Generally, delayed acquisition leads to less specialization of language in the brain." (Leybaert & D’Hondt, 2003)

This certainly shows up in the classroom.  And his perfectionist tendencies don't help.  He wants to understand everything perfectly the first time.  If he doesn't, he shuts down.  He will look away or just not pay attention at all, saying, "What?" and "I don't understand," or  "I don't know."  He can be socially awkward, as he doesn't always read subtle social cues.  (I'm glad for many of his peers being "deaf blunt," because he responds well to that! He struggles to read cues from kids who have been taught "beat-around-the-bush-politeness").

This year, we are starting a battery of tests.  One screening we completed was the GARS-2 (and 3), which tests to see if he's on the autism spectrum.  We are open to that being a possibility, but after filling out the screening, I highly doubt that will be diagnosed.  The above behavior of not picking up on subtle social cues is the one type of behavior that fits, but not otherwise.  The other screenings that look at his sensorineural differences all seem to fit.  He has grown out or is growing out of a lot of his behaviors, such as fit-throwing or being a horrible sport, which hung on for years, but we still see some behaviors we want to address before he hits middle school.  We feel confident that he will benefit from PT and/or OT next year, in addition to some extra tutoring and specific work on language comprehension and expression. 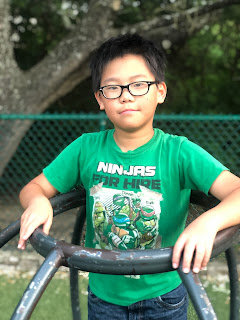 There is so much more to share about Travis and how his language has developed over the years as well as how we plan to address the gaps we see as he finishes up fourth grade. We are fully confident that we can close some and nearly close others of these gaps.  When we get his results back from the testing being done, I'll share that here.  It can be a scary process, but also a necessary one.  Finding professional support for a deaf adopted kid is no easy task and we are in the heart of a Deaf Mecca, so imagine how difficult it is outside of cities like Austin or the DC area.  In future posts, I'll share about those challenges as well. 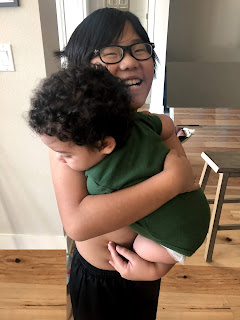 Travis turns 11 this week! I can barely believe it! He's a joy! We are often told how funny the boys are.  Tian is an obvious type of funny, but Travis has an understated humor that is hilarious.  He has deep capacity for love, which we weren't sure about in his early months and even years with us.  He would tell us he loves us often but didn't always show it in traditional ways.  He certainly does now.  Being an uncle and experiencing his nephew living with us from birth to almost one year has unlocked something in his mind, heart, and spirit.  He's shown us a new level of love and caring for all of us over the past year.

I could go on forever about this kid, but will leave it here for today. Thanks for reading and I have committed to do a better job for responding to comments!