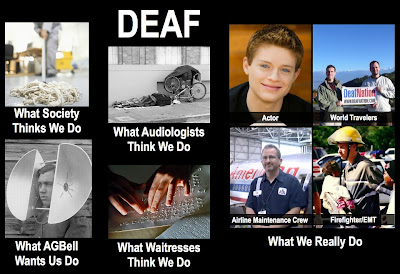 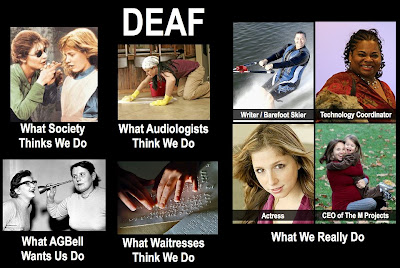 The real issue is, I could have filled 100 posters with photos of Deaf people in a wide range of roles.  Ken and I are thinking about creating one.  Here are a few of the people that come to mind.  Who would you add?  I know there are SO many more. This was just my initial list off the top of my head.  If you think of someone, let me know in the comments section and, if you can, link me to their website or some online photo of the person.
Adrean Clark: Cartoonist/Homeschool mom
Matt Diagle: Cartoonist
Paul Rutowski: Entrepreneur
Chef Kurt: Irish Chef/Sexiest Chef in Austin!
Ron Bledsoe: Business Owner "Paint Paramedics"
Laura Bledsoe: Homeschool mom
Thomas Means: CPA
Sean Berdy: actor
Anthony Natalie: actor
Kenneth Brown: first Deaf employee of OSBI and LVMPD
Tim Rarus: ZVRS Vice President
Howard Rosenblum: CEO of NAD - Attorney
Chris Wagner: ZVRS Vice President
Julie Rems Smario: Founding Executive Director of Deaf Hope
Dr. Glen Anderson: University Professor. First Black Deaf person to obtain PhD
Jewel Rocha: Elementary school-aged performer, advocate, and interviewer at Jewel News!
Ben Behan, Ken Mikos: Professors and co-creators of Signing Naturally Curriculum


Taken from TheMProjects.com:
GERTRUDE GALLOWAYFirst woman president for National Association of The Deaf and Deaf Seniors of America, as well as the first Deaf woman in the country to head a school for the Deaf
CLAUDIA GORDONFirst Black Deaf attorney in the United States and the first Deaf student to graduate from the American University (AU) Washington College of Law
LIZZIE SORKINFirst Deaf student to be a student government president at a predominately hearing University with close to 18,000 students
ASHLEY FIOLEKFirst female to race for a factory team last year when she joined the Honda Red Bull and X Games’ first Deaf gold medalist
MYRNA ORLECK-AIELLOCEO of TCS Associates, first Deaf women to be named as Entrepreneur of the Year by Professional Woman’s Magazine
MOON FERISEstablished and operates Western Interpreting Network (WIN) one of the four interpreting companies in the United States that are owned and operated by Deaf people
MARA LADINES-REYESOwner and Fashion Designer of By Mara, incorporates ASL in her clothing line in order to increase the public’s awareness of sign language
ROSA LEECo-Founder and Art director of the word-of-hand magazine called KissFist which features all talents within the Deaf community
MARLEE MATLINSpokesperson on closed captioning, recently lobbied on behalf of HR 3101, “The 21st Century Communications and Video Accessibility Act of 2009,” for National Association of the Deaf which got passed in 2010
CHERYL WULicensed psychologist who focused her work with multicultural Deaf children and their families for over 26 years in mental health, education, and community-based settings in the United States as well as Taiwan
LEAH KATZ-HERNANDEZBlogger and political activist who received attention from CNN as well as NBC for her blog, recipient of the “Local Grassroots Leadership Award” by the Latino Inaugural Celebration Committee at the Organization of American States
JULES DAMERONEstablished Deaf Women in Film (DWIF) with the sole purpose for supporting, recognizing, and helping all Deaf women cultivate their careers as well as signers associated with the film industry
MARY RAPPAZZOPainter who established the infamous one-eyed signature style which was shown at several art galleries in California and New York
TL FORSBERGSinger who was featured in See What I’m Saying film, Alanis Morissette and Tori Amos concert, Much Music, MTV, City TV, and The New Music
AMY EDWARDSComputer-generated artist who has worked on films such as Sky Captain and the World of Tomorrow, Mr. and Mrs. Smith, Pirates of the Caribbean: At World’s End, Fantastic Four, and Bolt!
MICHELLE BANKSActress, Director, and Write who was featured in several television shows such as Soul Food, Girlfriends, Strong Medicine, and ESSENCE Magazine
KAREN PUTZBlogger for her own blog called “A Deaf Mom Shares her World,” writer for Chicago Moms, Disaboom, and Parenting Squad
MELISSA RICHEqual communication access advocate who fought with the Lollapalooza, an annual musical festival in Chicago, to provide ASL interpreters for Deaf people
ERICA HOSSLERPassionate advocate for Bilingualism and is heavily involved with Early Hearing Detection and Intervention program (EHDI)
LAURA LOPEZGraduated from DePaul University in 2009 with a M.Ed in Educational Leadership and is currently the Director of Little Arrows Early Childhood Center
MARCELLA M. MEYERAdvocate, Leader, Warrior, Trailblazer, Mentor – many of the words used to describe Marcella M. Meyer (1925-2009). She was all of these and more.
She became GLAD’s first executive director, and in 1975, she became the Chief Executive Officer, a position that she held until retirement.
*Please note it was not our intention to be derogatory to women by using the term "waitress."  That title isn't negative to me.  I've never thought of it as negative.  We recieved a few comments from people saying we shouldn't have used that term, because "waitress" implies we think it will be a stupid woman who thinks Deaf people read Braille.  The truth is, it's happend over and over again in restaurants with wait staff of both genders, flight attendants of both genders, and random people, again of both genders,  calling the Deaf services departments or schools for the Deaf all over the country asking about Braille.
All of that to say, "waitress" isn't a negative term in my view.  It's just a job description we picked.  If you'd like to imagine it says "service personell" then knock yourself out.