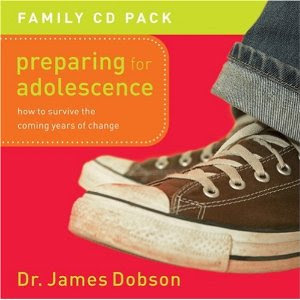 This weekend, my oldest daughter and I are on a special overnight trip to celebrate the transition she is going through from "kid" to pre-teen.

Dr. James Dobson first wrote the book Preparing for Adolescence back in 1978 (when I was four!) and it has since been revised, most recently in 2006.  We are reading and listening on CD, but he talks about stopping the "tape" and playing it on the "recorder".

As usual, Dobson's message is timeless.  Yes, he talks about the "birds and bees", but that's only one small part (about 1/7) of his discussion.  This talk is geared toward pre-teens, to prepare them for the coming years of change not only physically, but mentally and emotionally as well.  He prepares kids to the major feelings of inferiority they will face, assuring them that they are not alone.  He also hits one controversial topic many Christian leaders won't discuss.  I'll just say "long showers".  And I love love love how he addresses this topic with grace, love, and composure.  Mostly, I'm thankful that he put words to it so I didn't have to.

Listening to (or reading) Dr. Dobson is like listening to my dad,  He has so much wisdom and heart-deep love for the kids he's talking to.  For those who have spewed hate toward this man in the past, I challenge them to listen to even 10% of his 35+ years of broadcasts and books.  If you do, you can't help but feel the genuine love he has for others.  He's truly an outstanding man of God who has taken his leadership role seriously.  In an age of TV and internet evangelists who have mistreated and misused the name of God, Dobson has remained true to who he is in Christ.

I didn't mean to make this a Dr. Dobson love-fest, but I DO love him!  I've listened to him almost daily for over 10 years now.  If I ever get to meet him, I'll give him a hug like he's family.  He is family.

But I digress.  I've been impressed so far with my daughter's reaction to what we've discussed.  I'm also thrilled to learn that she has been sheltered from most of the teasing and peer pressure that lots of kids her age feel.  She's confident in herself and who God says she is.  I told her the blessing of this weekend is that we can talk about these feelings before they hit, so that she has tools to lead her to the freedom God intended for her instead of being sucked into the bondage of self-loathing.

Another pleasant surprise is that she had forgotten much of what I had told her about the birds and the bees when she was much younger.  As a foolish first-time mom, I once spewed way too much information about this subject when she was about 5 or 6.  A neighbor kid had brought up the topic and I panicked, kept running my mouth and didn't shut up.  In the following months, I prayed that she would forget much of what I told her.  She did.  Over the years, through our conversations and through school biology, she's pieced a lot together, but by her reaction today, I could tell that she didn't know it all.  That comforts my heart!

This weekend has strengthened her trust in Ken and me.  When she learned a few new things, her reaction was "Ew!!".  Gotta love that.  She has been able to see why Ken and I don't answer all of her questions.  She's pretty happy not knowing everything about everything.  She's also more understanding of why we put up some of the restrictive boundaries we do.  It's all to protect her.

Innocence is a beautiful part of childhood.  We want her to have as much of that as she can for as long as she can.  And we will make no excuses for guarding her innocence.

Preparing for Adolescence also covers the topics of conformity, puberty, the meaning of love (a great one, because crushes and infatuations do happen around our home right now), identity, and common issues teens face.  I believe it's currently out of print, but you can still find it on Amazon, eBay, or at Mardel.

I spend a lot of time blogging about our waiting boys in China, but while we wait, Ken and I are still parents to three amazing kids.  This will be a weekend to remember.