July 18, 2011
Photo Album
Last Thanksgiving, Ken and I were considering adopting a second boy.  China changed their adoption laws for the first time, allowing families to adopt two non-siblings at the same time.  We read about this sweet boy on the CCAI website and asked to review his file: 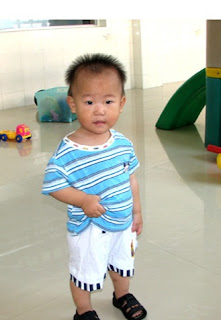 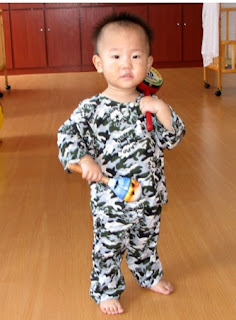 After reviewing EnEn's file, we sent this email to our agency:

Shortly after sending this email, we saw this on the CCAI website: 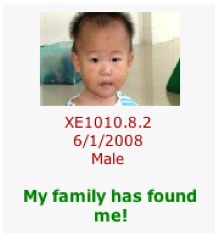 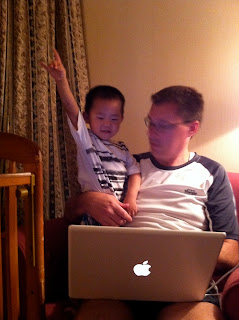 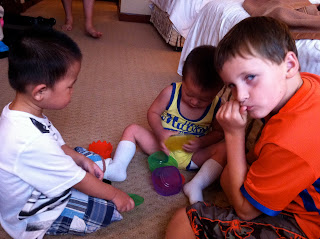 We've had Travis only about 30 hours, but the changes in him are amazing.  He came to us pretty scared and acting very babyish.  He was drooling when excited or sad and would watch Ken sign words in a book, but not copy them.  He was rough with the book and didn't seem to understand what we were communicating to him.
30 hours later, he's copying Ken's signs, pointing to photos (airplane and bear are his favorites) and signing them without prompting.  I've only seen him drool once today and although he's still acting more like a 2 year-old than a 3 year-old, he's also showing maturity.  He's completely potty trained, even at night.  He has obviously been taught how to hold a pen properly and enjoys doing so.  He loves his daddy and can't seem to get enough of looking at books with him.
Today, he has warmed up to me, letting me feed him, take him to the potty, kiss and hug and play with him.  He really enjoys playing with his older siblings and is slowly (very slowly) warming up to Tian.
I'll post another blog recounting today's events, but for now, I'm just happy to say we are settling in to being the Brown Seven.  We're so proud of the boys and don't know what we would do without our older Brownies.  Their help has been invaluable and SO VERY needed.  What troopers!
Welcome to the family, Travis XuEn Brown!